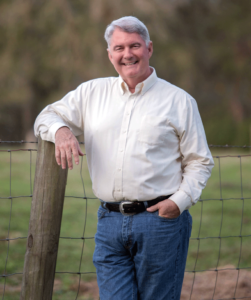 Pastor Russ Randall grew up on a farm in Lavonia, Georgia. He attended Pleasant Hill Baptist Church, where he accepted Christ as his Savior at the age of 12. Russ graduated from the University of Georgia with a Bachelor of Science degree in Education in 1984. He married his college sweetheart, Priscilla, in 1985, and they moved to Dunnellon, FL.

In May 2014, Russ graduated with a Master’s degree at New Orleans Baptist Theological Seminary. He and Priscilla have one daughter, Janna. Russ and Pris (as he lovingly calls her) are the grandparents of Cooper John Alt (2012), and Gracie Anne Alt (2014).

Russ also has a number of fascinating animals at his home, including sheep and a peacock. Many of these animals are used as humorous sermon illustrations, too! For instance, ask Russ about the border collie he used to have named “Blue,” and then get ready to laugh!